In the Web3 era, money lies in the code: Web3Cast with Preetam Rao

Pubslished by Administrator on November 24, 2022

Preetam Rao, CEO & Co-founder of QuillAudits, Web3 journey began five years ago when he came across the Bitcoin whitepaper and got fascinated by the whole idea of decentralized disruption. It was then that he quit his job and started to work in a blockchain-based startup.

He worked with Times Group, one of the largest media groups in India, and three other startups before starting QuillAudits. This is how his journey began from a developer to an entrepreneur, investor, mentor, speaker, and Web3 consultant. 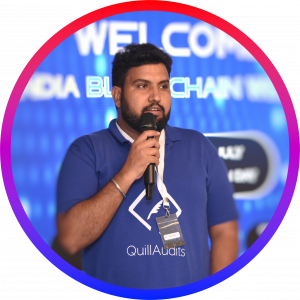 With several blockchain projects around in the market, which one do you think is standing out today? What is the sustainability ratio of such projects?

I think at this point in time, when we are at the early adoption of blockchain technology, the majority of the projects are working towards solving a cause. Thus, it would be needless to say, some of them stand out or are better than others.

The concept of smart contracts is incredible. Where do you see them in the next five years, and what kind of difference are they going to make in the future?

Indeed, “smart contracts” have become a critical component of many platforms and applications built today on blockchain technology.

Today’s smart contracts serve as a classic illustration of “Amara’s Law,” which states that we frequently overestimate new technology in the short term and underestimate it in the long term.

Amara developed this theory at Stanford University. The reward and incentive structure that determines how parties enter into contracts in the future will be revolutionized by smart contracts, even if they will need to develop before they are widely used in complex business partnerships.

To that end, it’s crucial when considering smart contracts to consider more than just how current ideas and structures might be transferred to this new technology. The real revolution in smart contracts will instead come from completely fresh paradigms that we have not yet imagined.

What does Web3 mean to you, and what kind of upgradation can we see to it?

Web3 is the next level of the internet, where we will see the more interactive and immersive form of the Web.

Because it places a greater emphasis on user-generated information and interaction, it is frequently referred to as the Semantic Web or the third iteration of the Web.

Web3 will have a decentralized web where people can govern the data they create without interference from companies like Facebook or Google. This will be the most prominent change between Web 2 and Web 3.

Going by the notion of Web3 I described above, the technology is an advancement over the current web and will be built on peer-to-peer networks rather than centralized servers.

Decentralized applications, enhanced smart contracts, and end-to-end encryption will all be features of Web3, which will also be decentralized (dApps). By doing away with the need for central authorities, the intention is to increase web efficiency, security, and privacy.

What are the three major obstacles surrounding Web3?

The three major barriers Web3 is facing today are:

First, Interoperability. Say you are in Metaverse A, and you have all your expensive accessories in the form of NFTs in metaverse A. Because of these expensive NFTs, you are clouted as a highly recognized person. Now, imagine, for a certain reason, you want to shift to Metaverse B. Though you may migrate them to metaverse B, this flexibility isn’t possible in every metaverse.

This, in fact, is one of the primary barriers blockchain projects are trying to overcome. It is “interoperability”, or how one blockchain communicates with another.

Some blockchains have come up with a solution to this issue through the use of ‘bridges’— bridges allow assets to be transferred between two blockchains. These bridges are often unreliable as most high-valued Web3 exploits were cross-chain bridge exploits. Though we can mitigate them with proper security measures, we will see how in the third point.

Second, Scalability. This is one of the complex issues with blockchain and a major hurdle in Web3 adoption.

This issue gained limelight in 2016 when a game called ‘CryptoKitties’ caught the eyeballs of the masses. Back then, the game got so popular that the Ethereum network became congested. Gas prices became too high, which raised the cost of the game for players. It was after this that phrases like “scalability trilemma” started popping up. However, this barrier can be removed by Layer 2 blockchains.

Third, Security and Trust. We have discussed smart contracts, but how safe are the smart contracts on which most Web3 projects are built? In Web2, we had 2FA and SSL security as ways to stay safe, but in Web3, security parameters are different.

With any new project launching in the market, people are yet to trust the authenticity of Web3. One of the ways to gain trust is via conducting smart contract audits at regular intervals.

With substantial experience in creating secured Web3 ecosystems and auditing 700+ projects, what kind of advice do you have for upcoming blockchain projects?

As one of the early adopters of crypto, I have seen many hype cycles and waves of crypto projects. When I think of investing in Web3 projects, I give it a practical thought because there are heaps of Web3/blockchain enabled projects that don’t have any practical utility.

Apart from the project’s utility, the ability to execute and fix errors is necessary to mitigate the risks associated with the Web3 project.

Playing in the cool and calm nature in my village.

Want to get in touch with Preetam Rao?