Metaverse to be our Second World: TechnoCast with Samuel {Edyme} Abayomi

Pubslished by Administrator on July 22, 2022 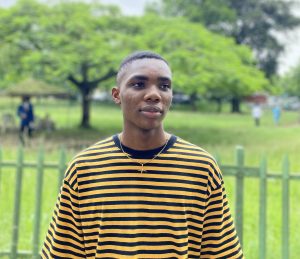 What are the biggest challenges in the mass adoption of Metaverse?

Most people, even on the Internet, don’t even know what the Metaverse is. Neither do they know that something called Metaverse exists or wants to exist. The second challenge, I think, is that this technology is so new it’s not even ready yet. What do I mean by that?

Well, where can you find normal-looking AR glasses that can see holograms? Even if you find it, I’m pretty sure you barely found it, and I’m sure it’s probably still malfunctioning somehow cause it’s still in the development stage. Technologies needed for the Metaverse ain’t ready yet. That is one of the challenges the adoption of the Metaverse is facing right now.

Now I know you might be thinking, what about Meta’s VR headsets and Horizon and other Metaverse spaces like sandbox, decentraland, and so on. These are all still early Metaverses and Metaverse equipment that are still actually not complete yet, and I think that’s part of the challenges. They are still in the development stage.

Do you think Metaverse will stick or strike the universe? What sort of changes can we expect in the next three years with Metaverse?

Ok, that first one is tricky, hahaha – Alright, let me answer the tricky one first

We will first be struck at what this digital world is capable of, especially the fact that you could interact immensely and virtually with someone at the other end of the world like they are actually with you. After the Metaverse has struck our universe by adoption rate, we will eventually want to stick with it just like I have today.

Now the second question: Changes to expect with the Metaverse in the next three years.

First of all, just like most people in this space would say, “we are actually really still early.” Looking at the way things are right now, there should surely be changes with the Metaverse in the next three years, but I’m guessing not much. (I hope the next three years prove me wrong, though, hahaha)

Other massive changes might probably not happen in the next three years, but hey, I hope we look back three years from now and laugh at this. You never know; this space is so unpredictable. Anything can happen when you least expect it.

Blockchain startups are overwhelming. Are they for good or bad?

This space is still so early that there are a different bunch of great ideas yet to come to reality.

Tokenization is creating interesting opportunities and is increasing trust and security between businesses and customers. What else do you think can be tokenized?

Yeah, you are right. Tokenization creates exciting opportunities and increases trust and security between businesses and customers. But aside from businesses, one other thing that can be tokenized is democracy. Like you know, voting power.

Ever heard of governance token?

A token is used to determine a say on a blockchain network or a platform.

Yeah, with time, probably in the future, Democracy, as in the power of voting, might be tokenized. Instead of balloting with papers or thumbprints and all that boring stuff.

At least, I hope so. I guess life will be so much easier that way.

What kind of freedom do you see with Web3.0?

I actually do see tons of freedom web3 would be bringing, on the Internet, of course. Imagine a social media with freedom of speech where anyone or everyone could go ahead and post anything they want with whatever word or meme they choose to use. Or an Internet where you could make your own top-level domain and allow second-level domains on it.

You know, like I could create my top-level domain as .bob if my name was bob or, let’s say, bob lee

I can create a domain name titled Lee.bob; see that, instead of .com or .org or .net

I could use .bob, which is my name, as a domain name, and it could be accessible. I could literally allow other second-level domains it.

Wouldn’t that be cool? Those are like snippets of the type of freedom web3 is bringing. Mainly the social media space and the domain space. Although about the domain, we can already see ENS domains and unstoppable domains trying to bring this, I see it as no different from regular centralized domain names. See ENS domains, for instance. You can only create domain names with .eth, and, with unstoppable domains, you can only create domain names with .wallet, .zill, .crypto, and others.

Compared to actually having my own domain name .bob.

One platform I see bringing this is handshake protocol, as in HNS. I don’t know if you’ve ever heard of that.

Although that domain name might not be accessible just yet with regular browsers like chrome or safari. But I think with some decentralized browsers, it can be accessible.

If you were given a superpower, how would you use it, and for what?

Errr… well, it depends on the superpower, actually, to know what I would use it for. But just generalizing it like it could be any superpower…

Well, I guess I would use it to do my part as an inhabitant of planet earth. Maybe save the world in a way my superpower could.

Blockchain technology is a different type of tech on its own. It might be so cool that it hands a commoner so much power, but one thing is for sure it’s definitely going to take over our world eventually.

Just like the blockchain, the metaverse is a different type of Internet on its own. It might be so cool that it sounds scary and dangerous, but one thing is for sure it’s coming, and it’s going to change our world as we know it. It’s all left to you now, are you ready?